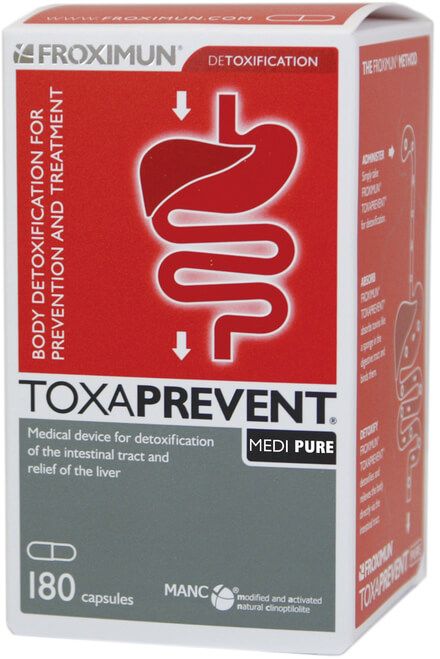 Toxaprevent is made from a clinical-grade activated volcanic ash or Modified Activated Clinoptilolite (MAC). This volcanic ash contains a host of naturally occurring minerals, arranged in a unique structure, which naturally and readily attract toxins.

What Does It Do?

Toxaprevent safely binds to and removes toxins from within the body in two key ways:

Toxaprevent has a specific affinity for the gut; it’s where it elicits its most powerful toxin removal action. The body’s intestinal lining is the largest site of toxin absorption and reabsorption – this is due to naturally occurring reaction within the body called enterohepatic circulation, whereby bile and other liver secretions are reabsorbed into the blood and return again to the liver.

"The key, beneficial function of Toxaprevent is that it prevents toxin reabsorption through enterohepatic circulation. Toxaprevent absorbs the unwanted toxins, preventing them from re-circulating throughout the body. Instead, they are absorbed and directly eliminated from within the body."

Toxaprevent has been clinically trialled to remove the following toxins:

How does it work?

Sounds too good to be true, right? It’s not! In fact, it’s very simple. Toxaprevent has a unique, porous, crystalline structure which functions like the pores of the skin, allowing the binding of toxins.

Additionally, Toxaprevent has a negative charge, allowing it to work just like a magnet when it’s met with toxins which are positively charged. This simple mechanism owes the success of Toxaprevent - its ability to capture, bind and remove toxins from within the body is a promising detoxification method for those suffering the disruptive effects of toxic build-up.