Written by Diana Boot, Pharmacist and Nutritionist
on 30th Jul 2021

Often painful, especially after eating, stomach ulcers are an annoyance we can do without.
Many people with ulcer symptoms such as heartburn or stomach pain may prefer to manage stomach ulcers naturally—after a visit to the doctor to rule out anything more serious.

Stomach ulcers (often called gastric or peptic ulcers) are open sores that develop in the lining of the stomach or the upper part of the small intestine. Under normal circumstances, your digestive tract is coated with a mucous layer that protects it from being damaged by stomach acid. An increase in the amount of stomach acid, or a decrease in the amount of protective mucus, provide ideal conditions for the development of a stomach ulcer.

An ulcer may be painful or cause no symptoms at all. Sometimes ulcers bleed, causing the stool to be dark and tarry in appearance, and can give rise to vomiting, with or without the presence of blood. Other stomach ulcer symptoms include the following:

• a burning sensation in the stomach area, which may worsen after eating

Before we get into how to cure stomach ulcers permanently without medication, let’s take a quick look at the most common causes of stomach ulcers.

Six out of ten stomach ulcers are caused by the bacterium Helicobacter pylori (H. pylori). This was discovered in 2002 by Australian doctors Barry Marshall and Robin Warren, who were later awarded the Nobel Prize in Physiology or Medicine for their discovery.(Previously, the prevailing belief was that stomach ulcers were primarily caused by a stress-induced increase in acidic gastric juices).

Anti-inflammatory medications known as NSAIDS are the second most significant cause of stomach ulcers. These include common over-the-counter drugs such as acetylsalicylic acid (ASA or Aspirin™), ibuprofen (Advil™) and naproxen sodium (Aleve™). If you have a stomach ulcer, and need a painkiller for any cause, your doctor or pharmacist will likely recommend you use paracetamol.

Stress and spicy foods do not cause stomach ulcers, but can cause them to worsen.

If you suspect you may have a stomach ulcer, or have been diagnosed with one, it is important to follow the advice of your doctor or other health professional. The bacterium that causes stomach ulcers, is also present in many stomach cancers, suggesting there may be a link. Standard treatment for a stomach ulcer is one or two antibiotics in conjunction with a proton pump inhibitor (PPI) to suppress the production of stomach acid.

The home treatments suggested should only be used in conjunction with medical therapies at the start of treatment, and used on their own following improvement in the condition, again in association with professional advice.

What to eat when you have a stomach ulcer

Curing a stomach ulcer naturally and permanently begins with the diet. While most sufferers understand that spicy foods are out, just what to eat when you have a stomach ulcer is something many people wonder about due to the preponderance of ‘old wives’ tales’ that go along with the condition. Drinking gallons of milk to ‘coat the stomach’ is one of them.

Diets geared towards curing stomach ulcers fast and permanently include those that actively fight H. Pylori. These include foods high in the antioxidant sulforaphane; foods containing phenolic derivatives; probiotic foods that are fermented, and honey. Foods high in soluble fibre may also be helpful, as demonstrated in a study at the Harvard School of Public Health and published in the American Journal of Epidemiology. The study showed that men who consume high amounts of soluble fibre reduced their risk of developing ulcers by 60 per cent.

In the first category of stomach ulcer-fighting foods, those that are high in sulforaphane, include broccoli, cabbage, rocket, Brussels sprouts, radishes, cauliflower, cabbage and kale. Sulforaphane—a member of a phytochemical group known as isothiocyanates—has been shown to suppress H.pyloriii. (Vegetables containing sulforaphane have also been shown to suppress various cancersiii, including cancer of the breast, prostate and bladder). 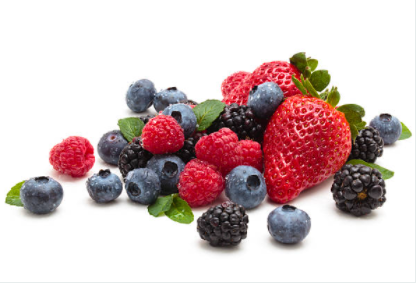 The third category of foods that are of value in natural treatment for stomach ulcers, fermented probiotic foods, include sauerkraut, kimchi, miso, kombucha, yoghourt, and kefir. These have shown some promise in protecting the stomach, and reducing side effects associated with conventional antibiotic/PPI therapiesv.

Finally, honey may provide a valuable home treatment for stomach ulcers. While actual clinical studies are lacking, it is known that Australian Manuka honey exhibits action against many types of bacteria, including H. pylori. Anecdotal evidence suggests that Manuka honey with a high UMF (20+) can help the healing process. Suggested dosing is three teaspoons of active Manuka Honey per day, before breakfast, in the afternoon, and before bedtime, preferably on a piece of dried bread.

Spicy foods irritate the lining of the stomach, which can make stomach ulcers worse. In fact, many people have found that simply giving up curries and chilies can cure a stomach ulcer permanently.

Full fat dairy products—sadly including chocolate milk and most cheeses—are acid-producing and should be avoided.

Alcoholic drinks, by increasing the production of stomach acid, can cause ulcers to worsen, as can caffeinated beverages, including colas and pops, and citrus drinks such as orange or grapefruit juice. Tomatoes and tomato sauces, garlic and onions, also aggravate ulcers in many people.

A few health supplements have been shown to help with the management of stomach ulcers. These include the following:

A high quality probiotic supplement. These are especially helpful after a course of antibiotics, to help rebalance the digestive system. The supplement may also be used to maintain the balance of flora in the digestive tract. We recommend Life-Space Broad Spectrum Probiotic (60 capsules) which is scientifically formulated with 15 different strains of premium quality beneficial bacteria.

Vitamin C. This vitamin plays a number of essential roles in the body, many of which are helpful for stomach ulcers. A studyvi on 7,000 adults reported in the Journal of the American College of Nutrition showed that infection with H. pylori is more likely if you have low blood levels of vitamin C. In supporting the tissues through rebuilding of collagen, as well as being a powerful antioxidant and immune system supporter, vitamin C can help speed natural healing of stomach ulcers.

It is important that the vitamin C you use will not further irritate the lining of the stomach. We recommend Bioceuticals Ultra-Potent C (500 g) which combines a high dose of various forms of vitamin C, together with zinc, vitamin E, beta carotene and rutin in an easy-to-mix-and-drink powder.

Curcumin (turmeric) may also help cure stomach ulcers. A 2001 study from Thailand involved 25 people with symptoms of stomach ulcers. The study participants were given two capsules (300 mg each) five times daily. After four weeks, stomach ulcers were absent in 12 of the people (48 per cent). After 12 weeks of treatment nineteen participants (78 per cent) showed no sign of ulcers. Curcumin is a potent anti-inflammatory and antioxidant that inhibits gastric acid secretion and suppresses the action of H. pylorivii.

Stress can aggravate existing ulcers, but not because anxiety causes an increase in the production of stomach acid. Rather, it causes a reduction in the amount of protective mucus that coats the stomach walls. For this reason, anything we can do to reduce stress is helpful in treating ulcers.

You’ve heard it all before: meditate, go for walks whenever possible, practise yoga—anything that will help you feel less anxious will help your ulcer heal faster.

We hope these suggestions for the natural treatment of stomach ulcers are helpful. Please do not hesitate to ask our pharmacists or Naturopaths for further assistance, should you need it, and to check with your doctor for an accurate diagnosis of any stomach pain, or bleeding.

Written by Diana Boot, Pharmacist and Nutritionist
on 30th Jul 2021